Fans who profanely belittle, demean and insult college athletes from the safe haven of the stands are among the lowest forms of human life.

But there is one line athletes cannot cross. They cannot go into the stands and lay hands on a fan – no matter what is said.

Oklahoma State guard Marcus Smart crossed that line Saturday night at Texas Tech. After crashing to the floor beneath one basket, Smart leapt up and shockingly went to the edge of the stands at United Spirit Arena to shove an older man in the chest with two hands late in a 65-61 upset loss to the Red Raiders.

In a significant officiating lapse, Smart was not ejected from the game and was merely assessed one technical foul. That created the potential for an escalation as Smart sat on the bench for the final seconds of the game, and especially when the game ended and Texas Tech fans rushed the court. Smart appeared to become more aggravated after the game and had to be herded off the floor by an Oklahoma State staffer.

This was a terrible incident that was terribly handled by all decision makers involved.

We don’t know what Smart heard to trigger his complete loss of composure. I certainly hope there was no racist language involved – and if there was, I can only imagine the difficulty ignoring such a thing in the heat of that moment. And I hope that fan is never allowed back in the arena. But in my mind, even the most vile of language would not have justified Smart’s actions. For that reason, the consequences of that egregious breach of athlete behavior should be severe.

Smart needs to be suspended Sunday. Whether Oklahoma State hands out the suspension or the Big 12 does it is immaterial. But the action needs to be swift and significant.

The Cowboys have eight regular-season games remaining. It wouldn’t be a shock if their best player misses most of them, if not all. Maybe the sophomore star’s entire season – and thus almost assuredly his college career – is over.

If you’re looking for some context or comparison, the episode that comes to mind is the infamous Malice in the Palace, the 2004 Detroit brawl in which Ron Artest went into the stands to fight with fans. Artest was suspended a record 73 games for that, and other players were suspended 25 or more games.

From a college standpoint, six years ago Memphis center Pierre Niles reached into the stands on the way off the floor at UAB after the end of a game and slapped a fan in the face. There was no action taken against Niles, by Memphis or the Conference USA office. There also was no video of the incident, just a still photo and eyewitness accounts – and nothing spurs action like live video of an egregious event.

Those are the two ends of the spectrum when it comes to disciplinary action. I’d expect the penalties to be far closer to the NBA’s draconian response than the dismissive lack of action from C-USA.

Whatever happens, Smart’s surprising decision to return to school for his sophomore year is becoming more regrettable by the game. A young man who would have been a lottery pick in 2013 is seeing his stock plummet as the Cowboys’ season spirals into a disaster.

Smart’s previously excellent reputation has been sullied by successive incidents and issues. He kicked a chair on the Oklahoma State bench twice on Jan. 25 during a season-low, four-point performance against West Virginia, and later tweeted out an apology. He’s also gained an unfavorable reputation for flopping in an attempt to draw fouls, and has chafed about what he considers unfair officiating.

As the Cowboys’ leader has lost his composure, the team has lost its way. Oklahoma State, which began the season in the Top 10, has now lost four straight games and is 4-6 in the Big 12 and 16-7 overall. 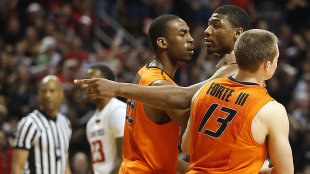 Marcus Smart is held back by teammates after he went in the crowd and pushed a fan. (AP)

This also is the latest incident hinting at a program spinning out of control under coach Travis Ford. Last week began with freshman guard Stevie Clark being dismissed after his second arrest of 2014. And Smart’s increasingly questionable behavior has seemingly been allowed to continue unchecked by Ford.

In his sixth season as coach of the Cowboys and without an NCAA tournament victory since 2009, Ford has been catching heat in recent weeks. This incident will not help, and any loss of Smart will not help turn around this season.

But the damage done is not just to Oklahoma State’s season or Ford’s job security. It is to Smart’s career and reputation. It is a sad deconstruction of a marvelous player who was highly regarded by almost all basketball people.

It is easier than ever now to say that Smart should have gone pro last year. And perhaps that is playing on his mind this year – if he is feeling mounting pressure to turn around this season and save his draft stock. But these complete abdications of composure are doing more damage than simply missing shots and losing games.

Marcus Smart will pay a severe penalty for that soon. And he likely will pay for it again in June when his NBA draft stock plummets.

News: New Technology Designed to Keep Drivers From Getting Into Car Accidents - Technology